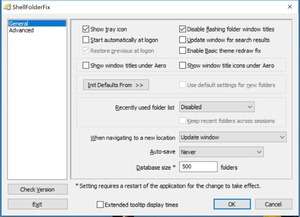 ShellFolderFix is a freeware software app filed under desktop enhancement software and made available by tweaker for Windows.

The review for ShellFolderFix has not been completed yet, but it was tested by an editor here on a PC and a list of features has been compiled; see below.

If you would like to submit a review of this software download, we welcome your input and encourage you to submit us something!

This is an app to make Windows 7 explorer folder windows remember their size and position. It has a couple of additional features too, and hopefully some more later on. It does NOT manage window size/positions of regular applications, if you want that, other apps like Window Manager do it. Allthough I haven't tried it, in theory it should work to run Window Manager simultaneously, if it's configured to ignore folder windows (found as "CabinetWClass"). I'd strongly recommend configuring WM to ignore them, or disable WM, before running ShellFolderFix, to avoid any potential "fighting" between the two apps.

ShellFolderFix on 32-bit and 64-bit PCs

This download is licensed as freeware for the Windows (32-bit and 64-bit) operating system on a laptop or desktop PC from desktop enhancement software without restrictions. ShellFolderFix 1.1.4 is available to all software users as a free download for Windows 10 PCs but also without a hitch on Windows 7 and Windows 8.

Compatibility with this software may vary, but will generally run fine under Microsoft Windows 10, Windows 8, Windows 8.1, Windows 7, Windows Vista and Windows XP on either a 32-bit or 64-bit setup. A separate x64 version may be available from tweaker.

Ranking in
Enhancement Software
#13 of 97